I published the original article over at my independent research project obsrva.org 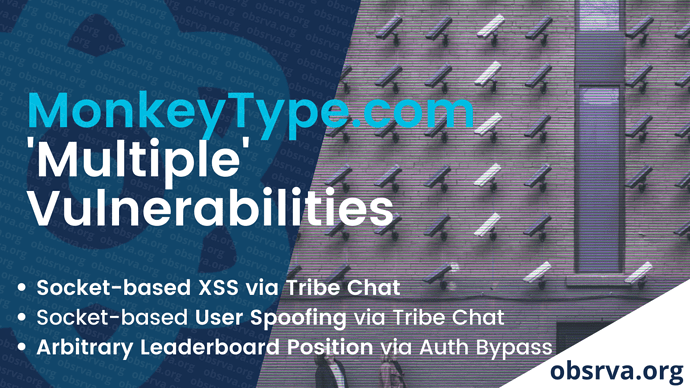 In May 2021, independent security researcher Tyler Butler found several critical vulnerabilities in monkeytype.com, a popular open-source typing-test application with a booming community of over 100k daily unique visitors. The vulnerabilities included stored cross-site scripting and user impersonation in the tribe chat room feature, as well as an authentication bypass vulnerability enabling any user to set arbitrary test scores and jump to the top of the leaderboard. Tyler engaged the site developer on discord and github, ultimately confirming all vulnearbilities were triaged. The developer was an excpetional partner in addressing the concerns, and even accepted a pull request to add a security policy and security.txt file to further support future security researchers to disclosure issues responsibly.

Monkeytype is a popular typing-test application with a growing online community. Started in early 2020, it’s quickly become one of the top typing test applications, boasting over 40 million page views. In late May, the lead developer announced some pretty impressive statistics for the site,

Dev.monkeytype.com is the beta release for monkeytype’s tribe—a feature which allows users to join rooms, chat, and compete in typing challenges together.

The following section details each vulnerability found includnig a proof of concept, statement addressing impact, and mitigation steps taken by the application developer. 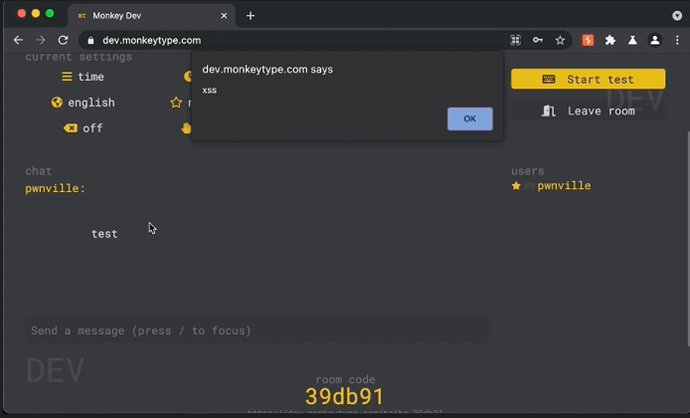 Vulnerability: The monkeytype Tribe Chat is vulnerable to stored cross-site scripting via the (1) message and (2) name parameters. While client side validation as implemented, it fell short of protecting malicious payloads that were injected directly in modified socket requests. To be exploited, a malicious user could create or join a chat room, send a normal message, intercepted the socket request and inject a payload into the name or message fields.

Disclosure Method: According to the bug report policy at the time of discovery, I engaged the application developer on Discord Chat (also here) and opened a Github Issue.

Shown below, a raw socket message is intercepted and modified by adding an svg alert message payload 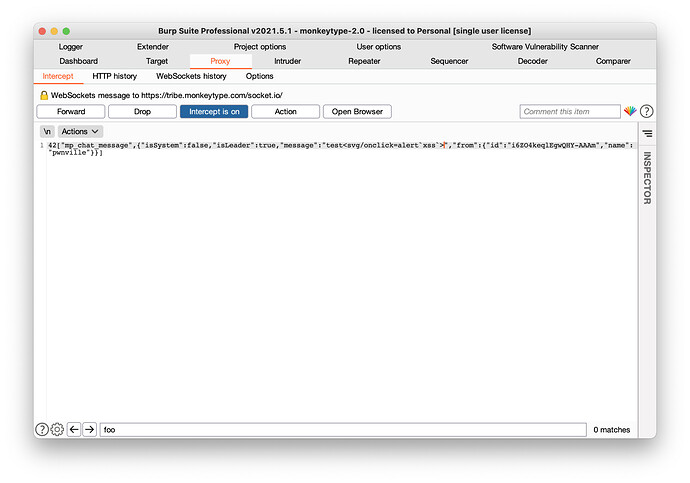 Impact: The impact of stored XSS in a chat room is severe. Once injected, the payload would be executed in the context of other user’s browsers who were within the same room. These payloads could be used to steal users authentication tokens, allowing complete account takeover. Making the vulnerability worse is the fact that tribe allows users to invite other’s to specefic chat rooms. Once a room has been successfully exploited with a XSS payload, a malicious user could then share the link to the specific chat room to others, increasing the number of potential victims.

Mitigation: The monkeyType developer eventually added client and serverside input validation to mitigate the impact of the vulnerability.

Vulnerability: User messages in the Tribe Chat can be impersonated due to improper authorization in the socket.io implementation. Malicious users can abuse current socket message authentication measures to create messages that appear to come from other users or system.

Disclosure Method: According to the bug report policy at the time of discovery, I engaged the application developer on Discord Chat and opened a Github Issue

Impact: Malicious users can impersonate others in the chat room, which could enable abusive behavior negatively affecting users.

Mitigation: At the time this vulnerability was discovered, the application developer had already addressed the issue in a not yet released patch. On June 3rd, the patch was merged into the developmenet site at dev.monkeytype.com (see issue 1503) 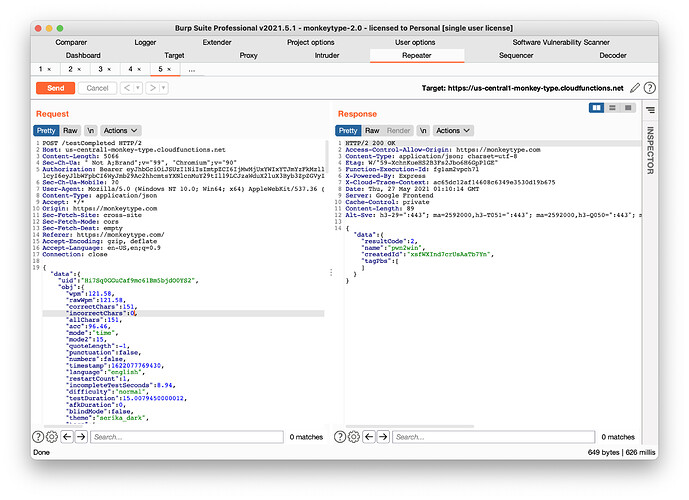 Shown above, the leaderboard is spoofed using a crafted request seen here being sent in BurpSuite

Disclosure Method: For the first time, I submitted this vulnerability through huntr.dev, a bug bounty platform that rewards developers and bug hunters for traiged vulnerabilities in open-source software.

Proof of Concept: The following request will overwrite the leaderboard, injecting the user pwnville_foo into position 9 with a faked wpm of 200.

Shown below, the fake user is now a top leader in words per minuete 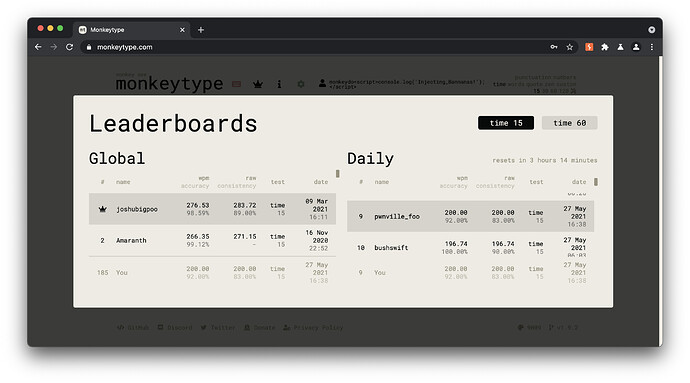 Impact: Using this vulnerability, malicious users can overwrite the entire leaderboard with username strings of their choosing, which could be used to deface the website.

Migitaion: On the huntr.dev submission for this issue, the developer stated he is “Looking into moving to a token-based auth system for this endpoint. All the other cloud functions will be moved to the token system after this has been solved since the publicity of this (having the ability to alter public leaderboards) takes priority” 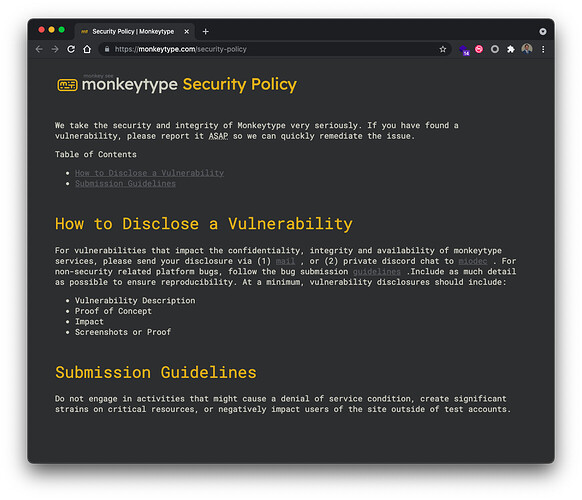 Since there were several vulnerabilities discovered on the platform and no real vulnerability disclosure policy, I approached the developer on discord with an idea to add a policy. The developer welcome the idea, and we decided on using the security.txt standard of adding a disclosure policy under the path /.well-known/security.txt. The policy will tell researchers that new vulnerabilites can be disclosed to the devloper via email or private discord chat. We also added a security policy on the main website. Both of these pull requests can be found in #1505 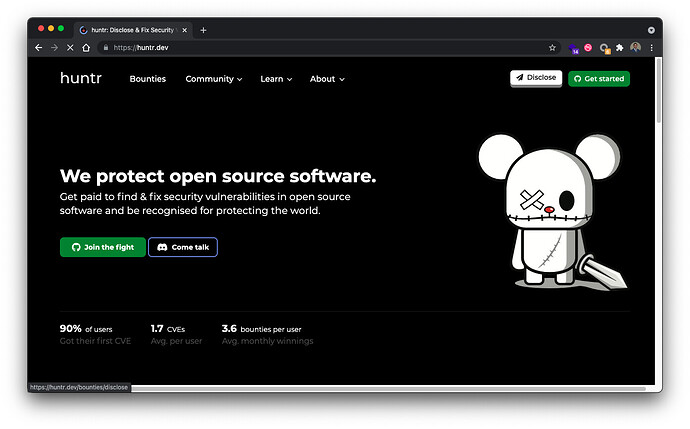 This was the first time I submitted a bug using the hunter.dev platformm and overall I was pleased with the experience. Huntr offers researchers an opportunity to get paid for disclosing vulnerabilities in open source software that does not already have a bug bounty program with the giants like hackerone or bugcrowd. The platform allows you to authenticate with GitHub and is fairly slick. To start this disclosure, I opened up a new issue on the platform and waited for the developer to respond with a patch. After the issue was fixed I was awarded a $40 dollar bounty. While it’s a small bounty, it’s a great way to organize your research and get paid while researching open source codebases.